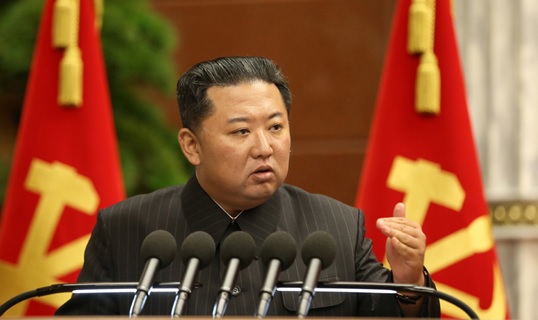 Kathmandu. The Third Enlarged Meeting of the Political Bureau of the 8th Central Committee of the Workers’ Party of Korea was held at the office building of the Party Central Committee on September 2 at a time when all the people are out in the advance to attain the first year’s goal in the implementation of the decisions of the Party Congress by making strenuous efforts and displaying tremendous fighting power under the leadership of the great Party.

Attending the meeting as observers were officials of the departments of the Party Central Committee, chief secretaries of the provincial, city and county Party committees, chairpersons of the provincial, city and county people’s committees, leading officials of public security and prosecutorial institutions, complexes and major factories and officials of the Cabinet, relevant ministries and national agencies, armed forces organs and the emergency epidemic prevention sector.

Upon authorization of the Political Bureau of the Party Central Committee,   Kim Jong Un presided over the meeting.

Explaining the purpose and significance of the enlarged meeting of the Political Bureau before discussing agenda items, the respected General Secretary referred to the importance for the provinces, cities and counties to fulfil their responsibilities in promoting the major policy tasks of the Party and the state, and reviewed and analyzed the problems urgent for protecting the safety of the people’s lives and stabilizing the people’s living.

The General Secretary said that the meeting should take practical measures for vigorously promoting the mid-term and long-term prospective undertakings, like preserving land and environment conducive to the eternal prosperity of the country and for successfully carrying out urgent immediate tasks, and presented agenda items to be discussed at the current meeting.

The Political Bureau of the Party Central Committee discussed the presented agenda items and unanimously approved them.

The enlarged meeting of the Political Bureau importantly studied and discussed issues of thoroughly implementing the Party’s policy on land management, taking thoroughgoing epidemic prevention measures as the global health crisis is getting worse day by day, increasing the production of consumer goods and successfully finishing this year’s farming.

First of all, the respected General Secretary analyzed and reviewed in detail the land management state of the country and clarified the tasks and ways for decisively improving the land management by enhancing the roles of the provinces, cities and counties.

Saying that the Party has consistently emphasized the land and environment conservation ever since the liberation and has been pressing ahead with the work as a more important political task in recent years, he stressed that land management means just the economic construction, the safety of the people and the essential condition for state development in the country with lots of mountains and rivers and long coastlines.

It is the core idea of the enlarged meeting for all the cities and counties to make their areas remain unperturbed and safe from any natural disasters by vigorously pushing forward with the land management by their own efforts, he noted.

He called on the Party organizations and power organs in the provinces, cities and counties to be well aware of the importance and urgency of the land management and the demand of the Party Central Committee at the present time and go all out for implementing the Party’s policy on land management.

What is more important than anything else is to maintain the viewpoint and attitude of considering the land management as the most priority task in carrying out the Party’s economic policy and concentrating efforts on it, he said, adding that it is urgent to practically uproot even a single underlying dangerous factor obstructing socialist construction at present.

Noting that the viewpoint and attitude on the land management is directly linked with the attitude of defending the Party and the revolution and of loving the state and the people under the situation where the disastrous weather is getting ever more pronounced worldwide and the country is also lying vulnerable to its danger, he asked all the senior provincial, city and county officials to bear in mind that no success can be expected in their work without performing the land management and to pay the closest attention to it.

He called on the Party organizations and power organs in the provinces, cities and counties to take practical measures and map out correct action programs for decisively improving the land management.

Noting that Songchon County of South Phyongan Province and Unsan County of North Phyongan Province, which used to be the repeated flood victims, have exerted primary efforts on land management and are now benefiting from it, he called on all the cities and counties to dramatically spruce up themselves by learning from the successes and experience of those counties which enhanced the organizing and executive abilities of the Party organizations and power organs in implementing the Party’s policy in the arduous struggle for nature-remaking and aroused all the people’s confidence and courage.

He underlined the need to take thoroughgoing measures to overcome abnormal climate, the danger of which has become greater in recent years, and to work out active and ambitious plan to conclude river improvement, afforestation for erosion control, dyke maintenance and tide embankment projects in the main and enter into their regular management in the five-year plan at least.

The General Secretary elaborated on consolidating material and technical foundations for dynamically pushing ahead with huge nature-remaking project, taking detailed crisis control measures to minimize natural disasters including flood and typhoon damage and applying control by law. He also detailed the need for leading officials of the provinces, cities and counties to undertake concrete operation and command with full responsibilities for land management in their areas.

Stressing that nothing will be impossible if the might of the Korean people united with a single mind is organized and aroused and officials fulfil their responsibilities and duties as commanding officials of the revolution, he appealed to all to make redoubled efforts to bring about a decisive turn in implementing the Party’s policy on land management.

Then, he mentioned further tightening the nationwide epidemic prevention, given the further worsening world health crisis.

Saying that the present dangerous situation of the worldwide pandemic which keeps spiraling out of control demands tighter nationwide epidemic prevention measure, he emphasized that all the Party organizations and officials should reexamine the national epidemic prevention system and the work in this field, and conduct a political, intensive offensive to strain and awaken the epidemic prevention front once again.

He called on all the officials to bear in mind that tightening epidemic prevention is the task of paramount importance which must not be loosened even a moment under the present situation, and to display high awareness and dedication to actively contribute to reliably safeguarding the safety of people and the well-being of the country.

Then, the General Secretary set forth tasks to increase the production of consumer goods in the light industry sector.

He noted that the officials in the light industry sector are required to organize and carry out the work for accomplishing this year’s plan on their own initiative with anticipation and dynamism, adding that they should have their Party spirit and popular spirit verified with substantial results.

Pointing to the need to give precedence to providing raw and other materials needed for light industry factories in decisively increasing the production of consumer goods, he took important measures for it.

He noted that all the sectors including key industries should observe strict discipline to provide materials needed for the production of consumer goods on a preferential basis, bearing in mind that the mission of the economy is to meet people’s material demand.

He underlined the need for the provincial, city and county Party committees to take strong measures to provide raw and other materials to their local industry factories to suit the specific conditions of their areas. He said that the light industry sector should conduct recycling in a more active, scientific and technical way, organize the production and supply of consumer goods in a planned and effective way, based on the overall and detailed study of the people’s demand in their living. He also underlined the need to actively conduct the production of August 3 consumer goods.

Enhancing the quality of consumer goods is as important as increasing their production, he said, calling for enhancing the role of scientists and technicians, raising the level of technical skill of producers and strengthening quality inspection so as to produce quality goods.

He stressed that the Party organizations in the light industry sector should conduct another round of ideological campaign to carry out the Party’s policy on light industry and thus fully arouse the enthusiasm of the officials and producers and thoroughly carry out the task for the first year of the five-year plan with an innovative surge in the production of consumer goods.

At the meeting, the General Secretary set forth tasks to conclude this year’s farming well and attain the planned grain production goal without fail.

Recalling that thanks to the powerful assistance from the entire Party, the whole country and all the people the agricultural field has waged strenuous struggle to increase grain production this year despite unfavourable abnormal climate and though everything was in short supply, he called for concentrating efforts on increasing the grain yield as much as possible before harvesting for the present.

He stressed the need for all the officials, Party members and other working people in the agricultural sector to turn out as one and conduct dynamic political and increased production agitation to give further momentum to supporting rural communities throughout society.

He emphasized the need to ensure as shrewd organization and commanding as possible to fully mobilize labour force and means to harvesting and threshing, to ensure responsible state provision of farming materials and equipment and to improve grain transport, processing and supply.

He gave an instruction to the Party Central Committee to take measures to successfully conclude this year’s farming and to make a breakthrough in settling the food problem for the people.

Relevant decisions were adopted at the meeting.

Next, the enlarged meeting dealt with an organizational matter.

Concluding the meeting, the General Secretary stressed time and again for all the officials in Pyongyang and in other provinces to be deeply aware of their heavy missions before the Party, the revolution and the people and display indomitable mental strength, exert strenuous efforts and demonstrate persevering execution in carrying out the decisions and instructions of the Party.

The Third Enlarged Meeting of the Political Bureau of the Eighth WPK Central Committee marked an important occasion that demonstrated once again the invincible leadership of the Party Central Committee by which it fully organizes and arouses the tremendous might of unity and militant power of the entire Party and all the people to courageously overcome all difficulties and obstacles and confidently lead socialist construction.