Kathmandu. ANNISU(revolutionary), the student wing of Communist Party of Nepal led by Netrabikram Chand ‘Biplav’ has submitted a memorandum to United Nations objecting to Kalapani area being included in India as a part of a new map.

Friday, a delegation team of Revolutionary leaders has strongly denounced the ‘attack of India’ and has called protest with the attention of the United Nations submitting a memorandum to General Secretary through UN resident Coordinator at Nepal.

The memorandum signed by the Chairman of organization Chiranjibi Dhakal quotes, “this attack against neighbouring countries territorial integrity and national sovereignty is the sign of India’s expansionist, imperialism and authoritarian behaviour.”

ANNISU(revolutionary) has requested India to stop its intervention in Nepal and to respect the national sovereignty of Nepal. The organization has also committed protecting the international border of Nepal. 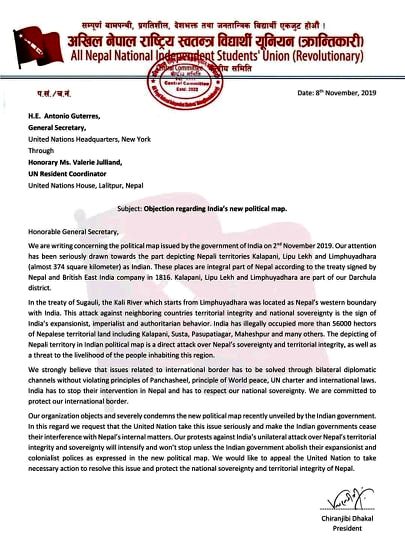