US should not impose democracy on the world 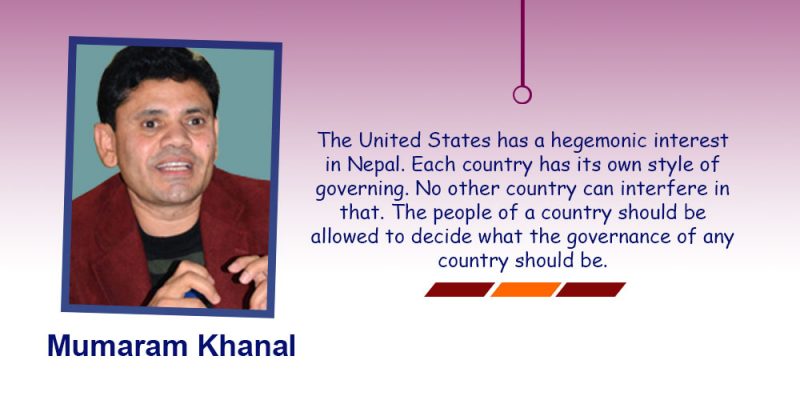 The governing system of each country is made for that country. There was a sort of bipolar world of who is democratic and who is not. There were democratic and undemocratic factions. America is now unknowingly launching a democratic front. Many analysts watch that it is a beginning of a faction in the name of democracy. Sri Lanka, Bangladesh may have a different context, in the field of human rights. The United States and India are particularly interested in the human rights situation in those countries. India also seems to be participating in a kind of democratic faction. This is the strategy of the democratic bloc that the US is trying to build now. The United States is trying to advance this strategically by involving other countries as well. The ambassadors of China and Russia to the United States have expressed in a statement that the move is a threat to the world.

Particularly powerful countries have two types of interests. The United States has a hegemonic interest in Nepal. It may be a small thing right now for a sensitive country like Nepal and the neighboring countries around that country to participate in such different factions. However, when participating in such factions, a country with a sensitive geography like ours should aware. This may seem like a small thing for the time being, but the coming conflict of power nations in the world, which is related to hegemony, and then we have to make a serious decision about which faction to join while protecting our existence. However, such issues are not deeply debated in Nepal. Even those in the government are not interested in what policy to adopt in this regard. Before we participate in a group called democratic or undemocratic, issued or set up by a power nation, we must seriously think on it.

Before Nepal can participate in the Democracy Summit organized by the United States, it is necessary to understand what issues are being raised in the forum and how the participating countries will take up those issues. It is advisable to participate only after understanding that way. I am not saying that Nepal should not participate in this summit. However, it is important to understand what the issues are, whether they are against the interests of our neighbors or not. Only then should we participate. At the same time, if the issues raised during the summit are not taken seriously, it will affect Nepal in the future. Since India will participate in this summit but China will not, it is necessary to study the long-term impact of that on Nepal. Therefore, Nepal should not blindly participate in the Democracy Summit held on December 9 and 10.

If countries like China and Russia are not invited to the summit, it could lead to major conflicts in the coming days. The US Asia-Pacific strategy in the Indo-China region seems to be becoming increasingly aggressive. Under former President Donald Trump, US Secretary of State Mike Pompeo has said that Chinese civilization is more frightening to US than Marxism. He had officially announced this. He also said that Marxism is not so scary for US because it exists in Europe, but Chinese civilization is America’s enemy. He also said that the United States had made a mistake by not intervening in China’s Tibet issue in the past. In the case of Taiwan, the US sphere of influence and the US interest in the South China Sea are becoming increasingly aggressive. What this makes clear is the fact that the United States is moving to blockade China in the name of various factions.

There is no word in the US Constitution to discriminate between blacks and whites. But in the United States, for the past 300 years, there has been a frightening distinction between blacks and whites. The spread of the corona virus worldwide as a pandemic has led to many alarming incidents of apartheid in the United States. A black man named George Floyd was killed on the street by white police. Similarly, discrimination and hegemony against Mongol Asians seems to be on the rise in the United States after Covid pandamic. Also, the US government is silent on this issue. There is no interest in controlling such activities. There is a law of non-discrimination but it has not been implemented properly. That is a serious American mistake and irresponsible. But that alone does not make the United States an undemocratic country. However, the United States does not appear to be actively pursuing its role in defending democracy and human rights.

The way the United States is preaching democracy and saying that other countries should follow the values ​​and norms it has established does not seem relevant. That American belief is wrong in itself. Determining the governance of a country depends on the wishes and needs of the people of that country. As I said, the United States cannot say that a democratic system should exist in all countries. Each country has its own style of governing. No other country can interfere in that. The people of a country should be allowed to decide what the governance of any country should be. That is the democratic system. However, it is undemocratic to say that the system of government should be in the country it wants, as the United States has said. That is inhumane. Also, the way America is trying to divide the world in the name of democracy and democracy in a democratic and undemocratic way is not relevant. Therefore, it is undemocratic for the US to say that there are no human rights in China’s Xinjiang, Hong Kong and Tibet because all these areas are an integral part of China. How to govern those areas is an internal matter of the Chinese people.

America does not question undemocratic activity in countries that share its views or support its policies and programs. In such countries, human rights violations are ignored. However, the United States is discriminating against countries with which its relations are strained or disagreeable. An example of this is not inviting China and Russia to the December Summit. It is certain to undermine America’s dignity and reputation. Such actions by the United States to impose its dominance are a threat to world peace.