The December Summit is based on the American definition 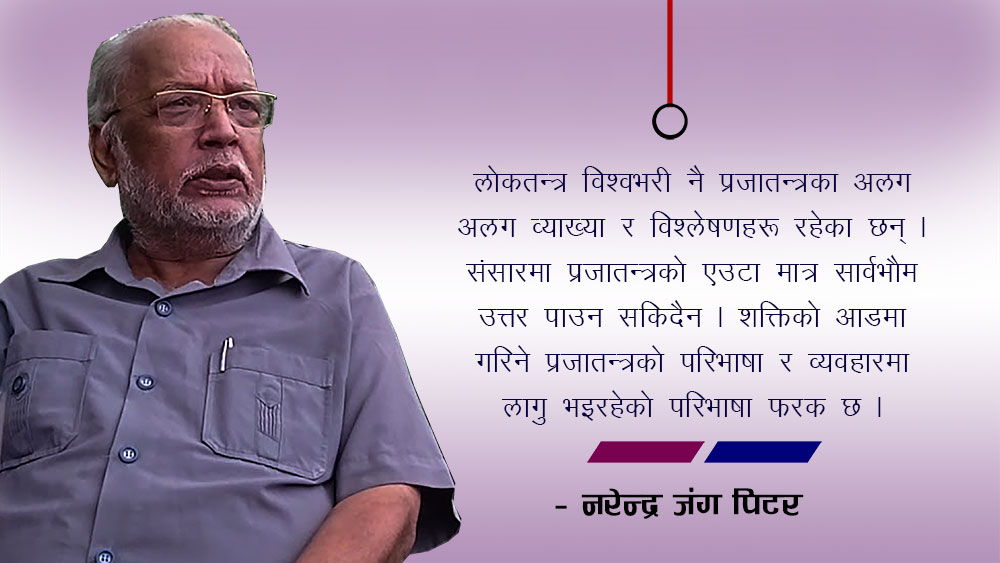 The World Democracy Summit is being held on December 9-10 at the initiative of the United States. It is in this context that the debate on democracy has begun. There are different interpretations and analyzes of democracy all over the world. There is no single sovereign answer to democracy. The definition of democracy based on power and the definition applied in practice is different. Democracy in political philosophy and in political practice is different. This has been debated for a long time. Whether it is the time of Plato or the time of Aristotle or democracy has been debated in Nepal as well the time of Panchayat system and till date. Western philosophy or Eastern philosophy has its own definition everywhere. There are still different standards of democracy and human rights.

The French Revolution brought the concepts of equality, brotherhood and independence. Similarly, the American War of Independence emphasized the natural rights of the people. From that came the idea of ​​nothing bigger than man. The development of the economy, the development of social practices and the development of technology have led to different perspectives on how to view and understand the world. After the French Revolution, a new consciousness entered in the society. Then the socialist camp has been developed. In the socialist camp, a debate has arisen as to what it means for a democracy to not only write and speak but also to live equally. Along with the development of capital, food, human rights and democracy were also linked. Questions began to arise as to whether human rights and democracy were the conditions in which only some people had capital and everyone else had to shout. After that, the socialist camp also split into two. One camp came as a liberal socialist camp. On the other hand, the debate started that the responsibility of the state should be towards all the people, not only the state should be as manager but also the guardian. The communist ideology that there should be human-centered thinking started all over the world. This debate has been practiced since 1917 AD. It was first used in Soviet Russia, and the revolutionary ideology developed around the world.

The United States has been a certifier of human rights and democracy since 1950 AD. The United States is distributing certificates of which countries have democracy and which countries do not. Today, the power defines that what is human rights and what is democracy. It determined by power. The liberal democratic camp is weakening. After capturing capital and technology, they came to the forefront of politics. They appeared in the name of corporate democracy. A new trend called globalization, liberalization and privatization came in front.

300 years ago, in the time of Babur, the world’s first economic power was China, the second power was India. Then after, power shifted to Europe. At the time Europe developed as a center of philosophical, economic, political and cultural. Later, the politics of some big countries fell into the hands of aggressive capitalists. Fascism came to in the power everywhere in the world.

Power in the world now seems to be shifting from one place to another. It is unlikely that the world power will be in one place in the future. Formerly a multi-polar society, it came into being after 1990. Then American think tanks interpreted it from two angles. All of these think tanks were close to the US government. “The contradictions or battles of the world today are the crisis of civilization,” said Samilton Hemlpin. It is a clash between civilizations. That is not a conflict of ideas, not a conflict of power. Other issues are secondary. ” Francis Fukuyama, a US government intellectual, wrote a book, End of History and the Last Man. He wrote this in 1990.

One of the world’s powers is trying to figure out how to stop China’s rapid growth. The same agenda is being discussed around the world. The previous rate of 5 percent has now been increased to 30 percent. All of this makes it clear that there is no longer a single power in the world. This leads to the expansion of power, the formation of new alliances. The Indo-Pacific Strategy, MCC is an example of that. The United States sees projects such as the Indo-Pacific and the MCC as tools to control the world. Things are being provoked for war now.

There is a book called ‘China and Power Chapter of the History Intercourse with the….’, which was published in 1902. Only 55 copies of the book were published in 1902. That was just for the US security apparatus or security agencies. The book states that China has moved forward with the goal of becoming a superpower. At that time, China was divided into five parts by the imperialist countries. At the time of writing, the Russian Revolution was not over. The Communist Party was not born in China, the Chinese Communist Party was born much later. Thus, a century before today, in 1902, an Irish writer wrote a book entitled “China Can Become a Superpower.”

Wherever you are fighting, the US strategy is to get the treasures and soldiers ready for war. Wherever America is working, totally moving according to the war character. The United States has said in a statement that it had no plans to sue President Saddam Hussein during the Iraq war. First there was the use of the media, then there was the Arab-Arab war. Later, a war broke out between Shiites and Sunnis in Iraq. So America’s strategy is to create internal conflict there before it goes to war. That is to keep the country’s self-help power in its pocket. As in Ramayana, his brother Vibhishan fought against Ravana. Sugruva was fought against Bali. The United States is trying to do the same.

The Open Society Foundation, an NGO that calls itself a defender of democracy, creates an environment for others to fight. The current conflict between China and India in Manipur, Doklam and Ladakh is not just India versus China. This situation has developed since China became India’s strategic partner. No such battles had taken place after the Sino-Indian War of 1952. The motive behind all this is, “My fight is to be fought by others.”

Nepal is between two big countries and big economies. Our country is not connected to ports. There are no large uranium mines here. But why is Nepal so important? This is the geography between two big countries. There is no end to such sensitive geography in the Himalayan region for the West. Nepal shares borders with emerging superpowers such as China and India. China shares borders with 14 countries. Nepal is the country with the most sensitive geography. Bhutan is within the Indian defense zone. That cannot be called independent. Doklam is a Bhutanese region. However, there was a conflict with China. Nepal is a sovereign country. In the past, Nepal has carried out the Khampa Rebellion. Even now, the secret activities in the name of religion, the activities in the name of NGOs, are not only for Nepal and its human rights.

Therefore, what the Nepali people or the country should be thinks based on our foreign policy. Our commitment is a non-aligned foreign policy. All our neighbors and all the nations of the world are our friends. No one is the enemy. So let us live in peace. Let us develop peacefully, not of China, not of India, not to create anyone as a pimp. Non-alignment is our foreign policy. We should not allow anti-China and anti-India activities in our territories. When two adult elephants fight, only zucchini-turn is destroyed. We need to be aware, vigilant and sensitive in this regard. We have to appeal internationally that we are not in any faction. Neither Quad, nor NATO, nor MCC is Nepal in any strategic faction. If there is a pure development project, it is right to get involved in it. However, Nepal is not involved in anyone’s strategic faction. We must fulfill the principle of non-alignment with our mind, words and deeds. Giving this message can strengthen our sovereignty, politics, culture and identity. But, if we side with one, Nepal can turn into a war zone. Many countries of the world are still the scene of international war games and confrontations. That is what is happening in Afghanistan, Lebanon and Sudan. These issues should be discussed in bilateral cooperation forums such as SAARC. The principle of non-alignment must again be fulfilled by mind, word and deed. That is the message we want to convey at this Democracy Summit.